May workshops in Scotland

I ran two workshops last weekend, and had a really good time working and sharing ideas with two very different groups of spinners. 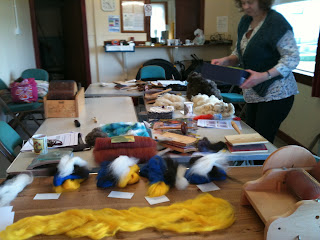 On saturday it was all about Spinning in Control - producing the type of yarn you want that will be right for the project you have in mind. However the first task was to get the spinning wheel that one participant had brought along back in working order! As it was an Ashford traditional that was relatively straightforward, I had spare drive band, brake band and spring in my Spinning Wheel First Aid Kit, and a can of oil to hand!
Then we discussed how planning a yarn for a specific project starts with the choice of fibre, and the method of preparation , before starting to spin. We covered how you find out how thick your  finished yarn needs to be, and (assuming you're aiming to produce a plied yarn) how thick the singles need to be. After practicing measuring yarn thickness both during spinning and finished yarn, we went over the relationship between thickness and twist, how to measure twist angle, and appropriate amounts of twist for different uses. Then we went through the steps of relating thickness, chosen twist angle and the twist ratio of the spinning wheel to determine what length of yarn to produce per treadle. If that all seems very technical, and off-putting, the tables in my book 'Spinning a good yarn' allow you to look up the relevant measures for the yarn you want to produce, without having to do the maths!
After lunch and cake it was time to put it all into practice, first each person decided on the type of yarn she wanted to make before  carding some fleece, and then spinning and plying it. With a bit of practice to get the right rhythm of drafting and treadling, the planned yarn was produced.
I dont know about the 'students' but I was certainly tired that evening - maybe more to do with having been out to the Opera and late home on both Thursday and Friday nights. The Barber of Seville and Eugene Onegin - impossible to choose only one!!!

After a day of focusing on precision, Sunday's workshop Playing with Colour was a real contrast - and I've got some photos for you to see.
The workshop covered three different ways of mixing fibres of different colours and textures to create batts that can be used either for spinning or felting. I had spindles available for anyone who just couldn't wait to see how their blend would spin up, but the day was really all about preparation.
With drum carders, hand carders, combs and a giant bag of fibres of many kinds, we had lots to play with! And plenty of tea and cake to keep us going of course.

Colour blending
The first technique involved using fibres in the three primary colours, plus black and white, to create shades picked out from a photograph. here are some examples: 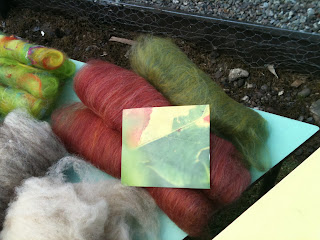 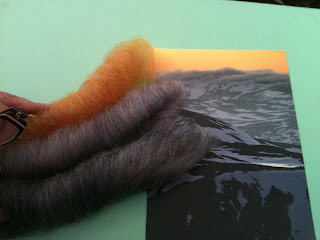 Noreen's mountain dawn blends
Gradient yarns
I had brought along an example of a Gradient - a yarn that shades smoothly from one colour to its opposite, created by blending fibre of the two colours in carefully calculated proportions. I used natural black and white fleeces to produce this: 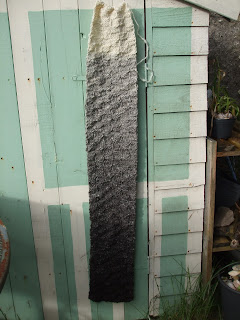 My natural Gradient, knitted into a basket stitch scarf
Three people decided to create their own gradients in the same black and white fleeces, here is one set of batts: 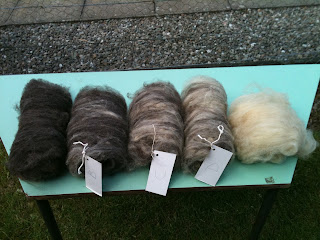 However Linda decided to go for colour in her gradient. in the foreground of the first photo you can see her fibres all weighed out and ready to start carding and blending. This is what she produced: 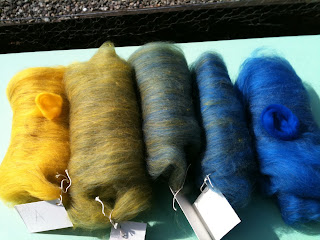 The primary yellow and blue were a little harsh on their own so we decided to add a small amount of natural black and white Shetland wool equally across the gradient. The small curls of yellow and blue on top of the end batts are the 'pure' colours. I'm really looking forward to seeing this yarn spun up.

Art yarns
The third technique was again to take inspiration from an image, but this time to create a batt that combined the main colours and textural elements from the photograph, to produce art yarn. As well as more than a rainbow's worth of colored wool tops, I had brought along a big bag of fibres and yarns for adding texture - different kinds of silk, linen, angora, cut yarns, to name but a few. here are my examples: 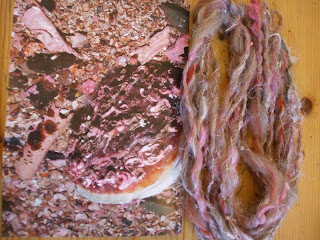 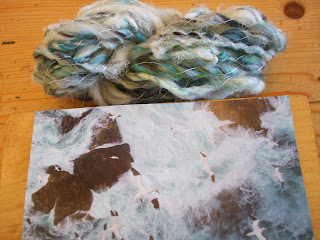 and here's what was created on Sunday : 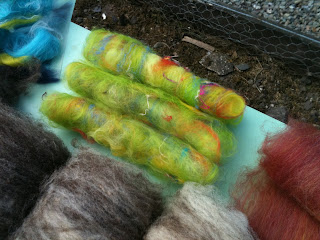 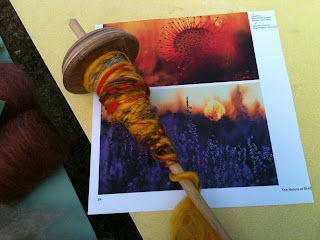 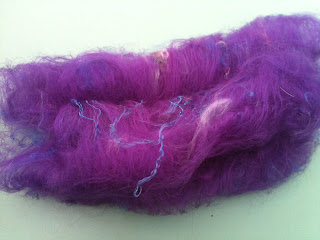 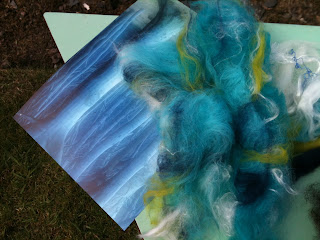 mandy's misty woodland art batts
Fuelled by cake and a fab picnic lunch (thank you Aileen), and accompanied during the afternoon by fiddle music from the bigger hall next door (and more cake, thanks to the Over 60's Tea hosted by the Brownies!!) everyone accomplished much more than I expected in the time. Everyone did the techniques in a different order, but most managed to do all three during the workshop, which was a real achievement as the gradients and blends require repeated carding, someties as many as five times. It was a lot of work but a really fun colourful day and I'm looking forward to seeing the yarns that are spun from the boxes of carefully prepared batts that everyone took away with them.
Want to try these yourself?
I'll be repeating these workshops in the autumn, as well as a 'beginners weekend'. If you are interested, drop me an e-mail for  dates etc. I'm also planning a new 'menu' of workshops for next year., some really exciting ideas but I'm keeping them under wraps for now Right now, I'm off to pack my equipment for workshops in Miagliano (BI) next weekend, and then a short class in Venice the week after........then it's back to Perthshire for Fleece on the Hoof. See Workshops tab for details.